These large black birds are lightly built, with long angled wings and a deeply forked tail. They have a very distinctive, easily identifiable silhouette.
Frigate birds are almost always seen in flight, soaring high above the coastline. They dive for fish or chase other seabirds in flight to make them disgorge their catch. In the Florida Keys, Frigate birds sometimes hang around near fishing boats, waiting to intercept fish being thrown back into the water.
Males have a bright red throat pouch which they inflate during courtship. Females have a white breast patch, and immature birds have white heads and underparts.
Frigate birds are most numerous in Florida from April to September. They roost in colonies, the best known of which are at Seahorse Key near Cedar Key, on islands in Tampa Bay, and in the Indian River-Mosquito Lagoon area.
In the United States, Magnificent Frigatebirds breed only on the Dry Tortugas where about 100 nests can be found on Long Key. However they also breed in the Caribbean and in coastal areas south to Brazil.

The Magnificent Frigatebird (Fregata magnificens) was sometimes previously known as Man O'War or Man of War, reflecting its rakish lines, speed, and aerial piracy of other birds.
It is widespread in the tropical Atlantic, breeding colonially in trees in Florida, the Caribbean and Cape Verde Islands. It also breeds along the Pacific coast of the Americas from Mexico to Ecuador including the Galápagos Islands.
It has occurred as a vagrant as far from its normal range as the Isle of Man, Denmark, Spain, England, and British Columbia.
The Magnificent Frigatebird is 100 cm (39 inches) long with a 215 cm (85 inch) wingspan. Males are all-black with a scarlet throat pouch that is inflated like a balloon in the breeding season. Although the feathers are black, the scapular feathers produce a purple iridescence when they reflect sunlight (in contrast the male Great Frigatebird has a green sheen). Females are black, but have a white breast and lower neck sides, a brown band on the wings, and a blue eye-ring that is diagnostic of the female of the species. Immature birds have a white head and underparts.
This species is very similar to the other frigatebirds and is similarly sized to all but the Lesser Frigatebird. However, it lacks a white axillary spur, and juveniles show a distinctive diamond-shaped belly patch.
The Magnificent Frigatebird is silent in flight, but makes various rattling sounds at its nest.
This species feeds mainly on fish, and also attacks other seabirds to force them to disgorge their meals. Frigatebirds never land on water, and always take their food items in flight.
It spends days and nights on the wing, with an average ground speed of 10 km/h, covering 223±208 km before landing. They alternately climb in thermals, to altitudes occasionally as high as 2500 m, and descend to near the sea surface.
www.oldhat.com
Posted by Miami Fishing Charters with Capt. Paul at Wednesday, February 27, 2013 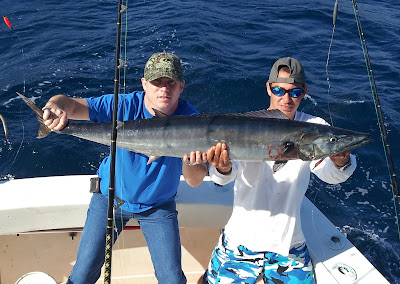 Finally the weather cooled off and the fishing picked up. By the end of January, Dolphin and Wahoo were biting off the Miami coast. 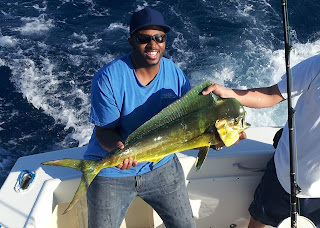 With a little more cool weather and the Gulf Stream edge moving a little closer to shore we should start seeing more Sailfish!

By working out as many details as possible, you will avoid misunderstandings. Here are the questions you should ask the captain or booking agent:

Fishing half day charters:
If a half day is all the time you have or if you are limited by budget than it's got to be a half day. Because every day of fishing is a new adventure, the more time you are out there fishing will generally produce a more desirable catch.

Picking the cheapest boat:
Everyone wants a good deal, but choosing a charter boat based on price is almost always a bad idea. A low price could mean several things: The boat isn't properly maintained; the tackle isn't properly maintained; the boat is small; the crew is working for less money; the captain doesn't do this full time; or a host of other things and few of them good. Remember, 'sometimes you get what you pay for'!

Picking the right boat:
The best thing you can do is go to the charter dock, speak to several captains and take a good look at the boat and the tackle they have to offer. If you can't see the boat in person then ask a lot of questions. You should at least feel comfortable speaking to the captain on the phone.

Setting unrealistic expectations:
Be realistic with your expectations, this is fishing! Be open to suggestions from an experienced pro at the helm and you can avoid a lot of disappointment at the end of the trip.

Prepare for a day offshore:
You may be fishing with people who swear they never get seasick but all of a sudden they are over the side. If there's any doubt, always ask your charter companions to use a seasick prevention pill at least an hour before departure, or for breakfast they should have doughnuts or bananas because they taste pretty much the same coming up!
Don't forget a hat, sunscreen, polarized sunglasses and a camera. If the charter doesn't include food or drinks be sure to bring your own.
www.oldhat.com


Posted by Miami Fishing Charters with Capt. Paul at Wednesday, November 07, 2012 No comments:

A New Adventure Every Day

Every day that I go out fishing I feel lucky. Some days are better than others. You can't go out every time and catch spectacular fish. I always try my best for the customers and for me, but fishing is fishing. One day you catch some nice sized Dolphin and the next you catch Bonitos, Jacks, Bluefish and Spanish Mackerel! 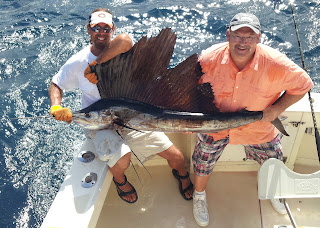 October's fishing has been a mixed bag. Early in the month we were catching Dolphin and Tunas. On one good day we caught this beautiful Sailfish while we were trolling for dolphin and tuna. It was the anglers 'dream come true'. You know how 'elephants eat peanuts', this Sailfish ate a half ounce feather!

Sport fishing yesterday was more difficult. We caught a nice Spanish mackerel, lost a good sized Dolphin at the boat, another hit and spit and we had a couple misses on the deep lure.
Every day is a new adventure!

It was hot in September and the charter business was slow. We fished and had some fun. Most of the fish we caught were within 3 miles of shore.

We caught some nice Blackfin Tunas, some very large Bonitos, did I say Bonitos, a lot of Bonitos and a few Kingfish.

July and August has brought us mostly calm and warm days. We've been able to catch Dolphin, plenty of Bonito and a few Wahoo.
Most of the Dolphin we were catching in July were at least 5 mile offshore. We saw some nice sized fish in some of the schools, but there was an abundance of small ones, too small to keep. The size minimum is 20 inches, measured from the head to the fork in the tail.

Years ago I would see some fishermen get into a school of small Dolphin and throw a net on them. There are still some people who kill babies!

August brought us more and more small Dolphin. We were finding them a little further offshore. The action was real good but too many had to go back in the water to get bigger.

Bonitos, Bonitos and more Bonitos just 2 miles from shore. All you want, come and get 'em!


To sum it up, we had some pretty good fun filled days.

Miami Fishing Charters with Capt. Paul
Captain Paul Lee is a native of Miami who has been boating and fishing the waters of South Florida and the Bahamas since he was a child. For more than thirty years he has been a licensed captain, charter fishing, tournament fishing and also captaining private sport fishing vessels in South Florida and the Bahamas.